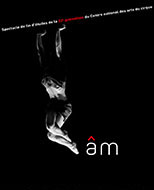 with the collaboration of Patrice Wojciechowski

Creation at the Cnac
December 2010

in the Cnac big top

We each carry within us an immense and solitary world, albeit populated with the noise of others. In our innermost reaches we find refuge, but also isolation, inventing our own private melody among the chaotic hurly-burly of daily life, sometimes working against the crushing din of the omnipresent community. We can share everything, except that one, irreparably singular experience. We can share a moment in time, a fragment, laughter, love, thoughts, illusions and possibilities. Guided by Stéphane Ricordel, a founding member of the famous Arts Sauts, the National Centre for Circus Arts 2011 graduating class will explore these paths of existence, which ricochet back and forth between a furtive sense of solitude and the joy of being together. A mobile stage design in which air, water and images define the space, lets the circus artists’ emotions transpire through acrobatics, risk taking and skill, in a fleeting, instantaneous moment. All of this communicates, quite “simply”, the spirit and fragility of life.

The second phase of the CNAC curriculum is the professional integration programme in which the graduation show is put on, validating the Diploma in circus arts professions.

This year the CNAC has invited Stéphane Ricordel to direct, assisted by Patrice Wojciechowski, both of whom were founding members of Les Arts Sauts (1993-2007). For almost fifteen years they travelled around France and the rest of the world putting on poetic trapeze performances as part of their ongoing research into the subject of vertigo and the void. .

In 2009, Stéphane Ricordel was appointed joint director of the Silvia Monfort theatre in Paris, with Laurence de Magalhaes.

The artistic and technical team

With the 2010 graduating class

and with the participation of Juan Pablo Palacios, aerial cradle catcher.

Auch (32) Circa Festival
between 22nd and 31st October